Sacred and Folkloric Music of the Near East

Qadim is a word found in both Arabic and Hebrew meaning ‘ancient’ as well as ‘that which will come.’   The ensemble’s repertoire includes Arabic, Jewish, Turkish Sufi, Hebrew-Yemenite, Armenian, Greek, Ladino and Moroccan music, celebrating the common musical and spiritual heritage of the region’s cultures, while honoring the great diversity found within them.

Acclaimed for their passionate performances, The Qadim Ensemble is comprised of accomplished and acclaimed musicians. The San Francisco based band has attracted a growing global audience who are responding to their authentic musicianship and timely message of peace and cross-cultural appreciation.

“Truly world music, some of the most open, human music you’ll hear . . . Essential”

“Beautifully presented, the players bring superb musicianship and palpable enthusiasm to each performance. Eliyahu’s ney flute along with Rachel’s succulent vocals are stars . . . creating a sense of human communication with the divine.” 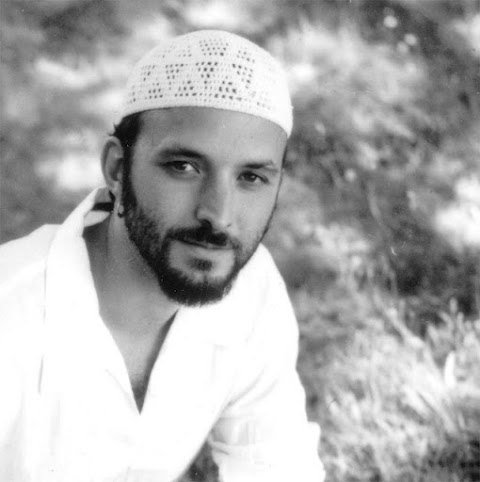 Eliyahu studied for over ten years with the Hindaustani bansuri flute master G.S.Sachdev, one of the worlds most highly esteemed musicians in that ancient tradition.  In Istanbul, Turkey, he studied with Neyzen Omer Erdogdular and Neyzen Ahmet Kaya, in Morocco with Akdii Abdelsalaam, and in Israel with Itamar Shachar. 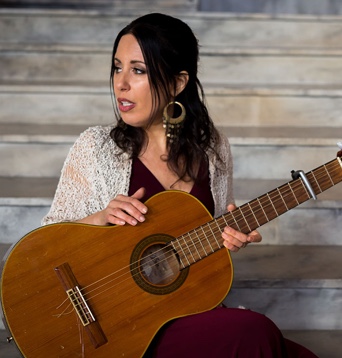 Rachel Valfer is a passionate singer and oud (Arabic lute) player who brings depth of feeling to every song. She studied Maqam and Persian dastgah modal systems in Israel and Palestine for six years at the Center for Middle Eastern Studies, and sings with several ensembles in the Bay Area. Gifted in the art of language, Rachel sings in Hebrew, Arabic, Farsi, Greek, Turkish, Ladino, and Armenian. 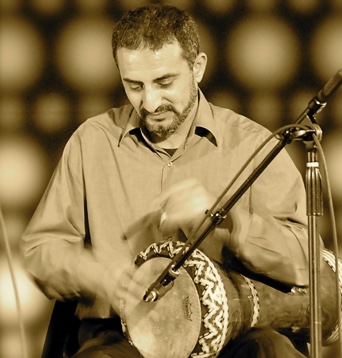 Syrian-born Faisal Zedan was divinely inspired to play Arabic percussion at the age of 15. He received instruction from a distant relative, the only drummer in his village of Oum Dbaid.  Since moving to the United States, he has played with many of the greatest Arabic musicians, such as Ali Jihad Racy, Julien Jâlal Eddine Weiss, and the band Kanzaman. 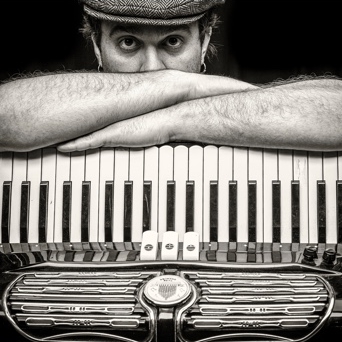 Dan Cantrell is an award winning composer known for his innovative and evocative film and theatre scoring approach, as well as his virtuosic playing abilities on the accordion, piano and musical saw. He holds a BFA degree from CalArts where he majored in Composition and Piano performance. Dan is a self taught master of the accordion, excelling at Balkan, Romani, Eastern European, and Klezmer styles. In recent years, Dan has performed and recorded with Tom Waits, Joanna Newsom, Beats Antique, Bono, Danny Elfman, members of the Klezmatics and Fishbone. 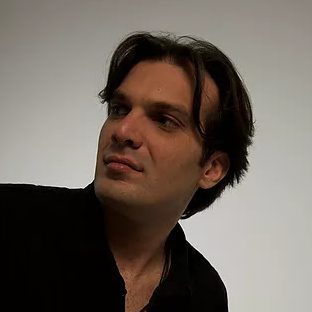 Critics and music lovers around the world use to describe musician, producer and award-winning composer Hamid Saeidi’s work as dynamic, captivating and transcendent. Over his career, Hamid has composed musical scores for more than 30 films, television programs, dance and theatrical presentations, receiving awards at the Beirut film festival (2002), the Iran TV Festival (2002-2004-2007) and the Society of Critics of Theater in Iran (2005). 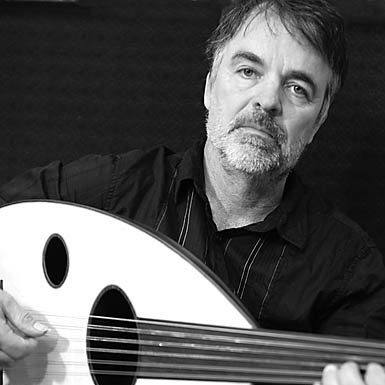 Gari Hegedus plays variety of stringed instruments from Greece and Turkey including lauoto, oud, saz and hand drums as well as violin and viola. In addition to playing in the duo Teslim with violinist Kaila Flexer, he performs with world music group Stellamara and Persian vocalist Hamed Nikpay. He has studied with oud master Naseer Shamma and has recorded and performed with Ross Daly. He has toured with the Mevlevi Dervish (Sufi) Order of America and continues to participate in Turkish ceremonial and devotional gatherings around the country. 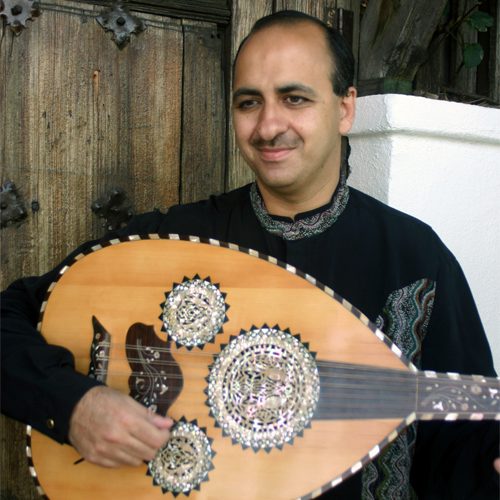 An active and sought after performer, Naser Musa has performed at prestigious venues such as Carnegie Hall, the Kennedy Center, Hollywood Bowl, the United Nations and Chicago’s Symphony Hall among other places. He toured the United States, South America and the Middle East, and was featured as a soloist with the Cairo Orchestra during its 2005 U.S. tour with Grammy award winners Youssou N’Dour, of Senegal and Egyptian producer and arranger Fathy Salama. For the past 5 years Naser has toured worldwide with highly acclaimed Persian band Niyaz and world renowned singer Azam Ali. 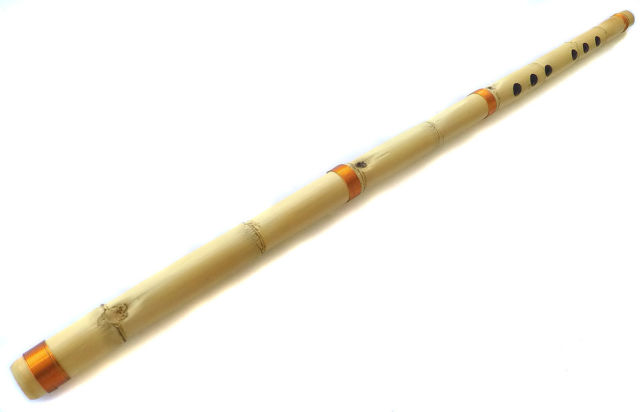 The ney is an end-blown flute that figures prominently in Persian, Turkish, and Arabic music.  The ney has been played continuously for 4,500–5,000 years, making it one of the oldest musical instruments still inuse. The ney consists of a piece of hollow cane/reed with five or six fingerholes and one thumb hole. Ney is an old Persian word for reed. 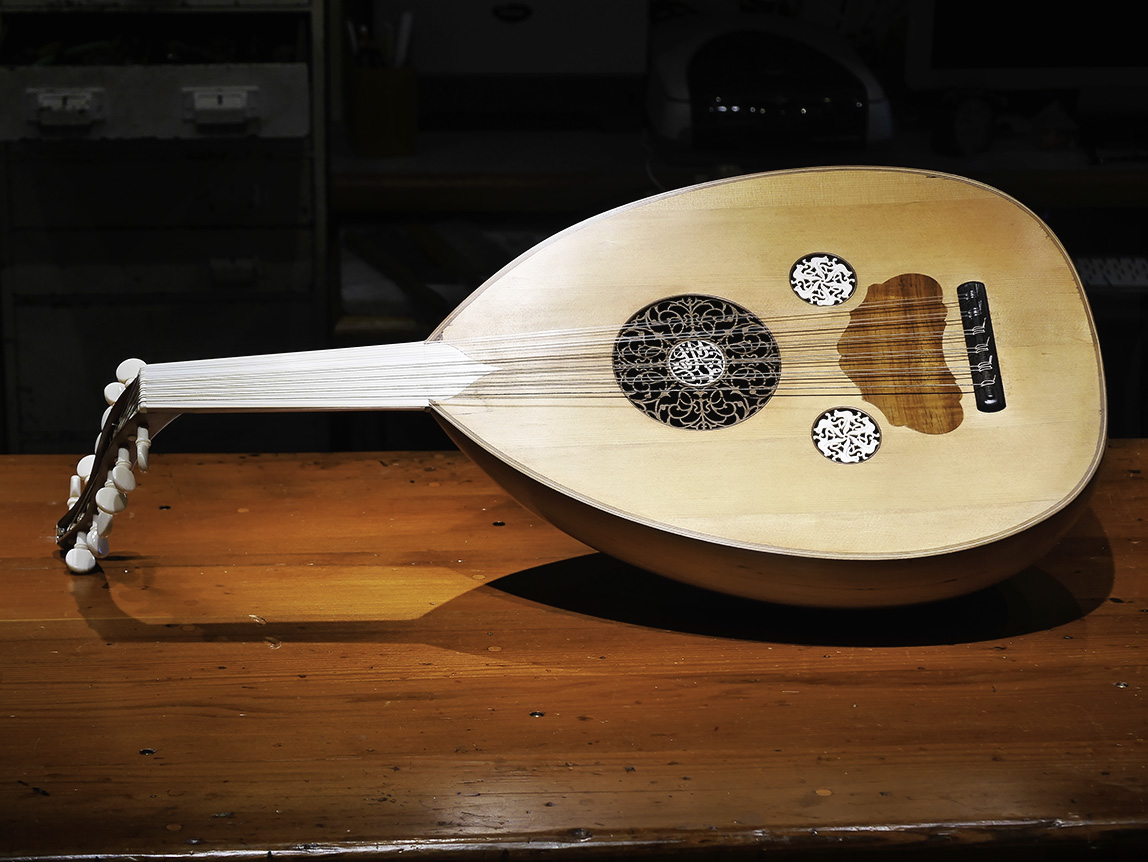 The oud is a pear-shaped stringed instrument commonly used in Middle Eastern music. The oud is readily distinguished from the European lute (its descendent) by its lack of frets and small neck. This instrument and its close relatives have been a part of the music of each of the ancient civilizations that have existed in the Mediterranean and the Middle East regions, including the Sumerians, Akkadians, Persians, Jews, Kurds, Babylonians, Assyrians, Armenians, Greeks, Egyptians, and Romans.

The saz (or baglama) is a stringed musical instrument shared by various cultures in the Eastern Mediterranean, Near East, and Central Asia. The term saz is mainly used to refer to a family of plucked string instruments, long-necked lutes used in Ottoman classical music, Turkish folk music, Kurdish music, Azeri music, Armenian music, Persian music, Assyrian music, and in parts of Syria, Iraq and the Balkan countries.

Setar (Persian: سه ‌تار, from seh, meaning “three” and tār, meaning “string”) is a Persian musical instrument. It is a member of the lute family. 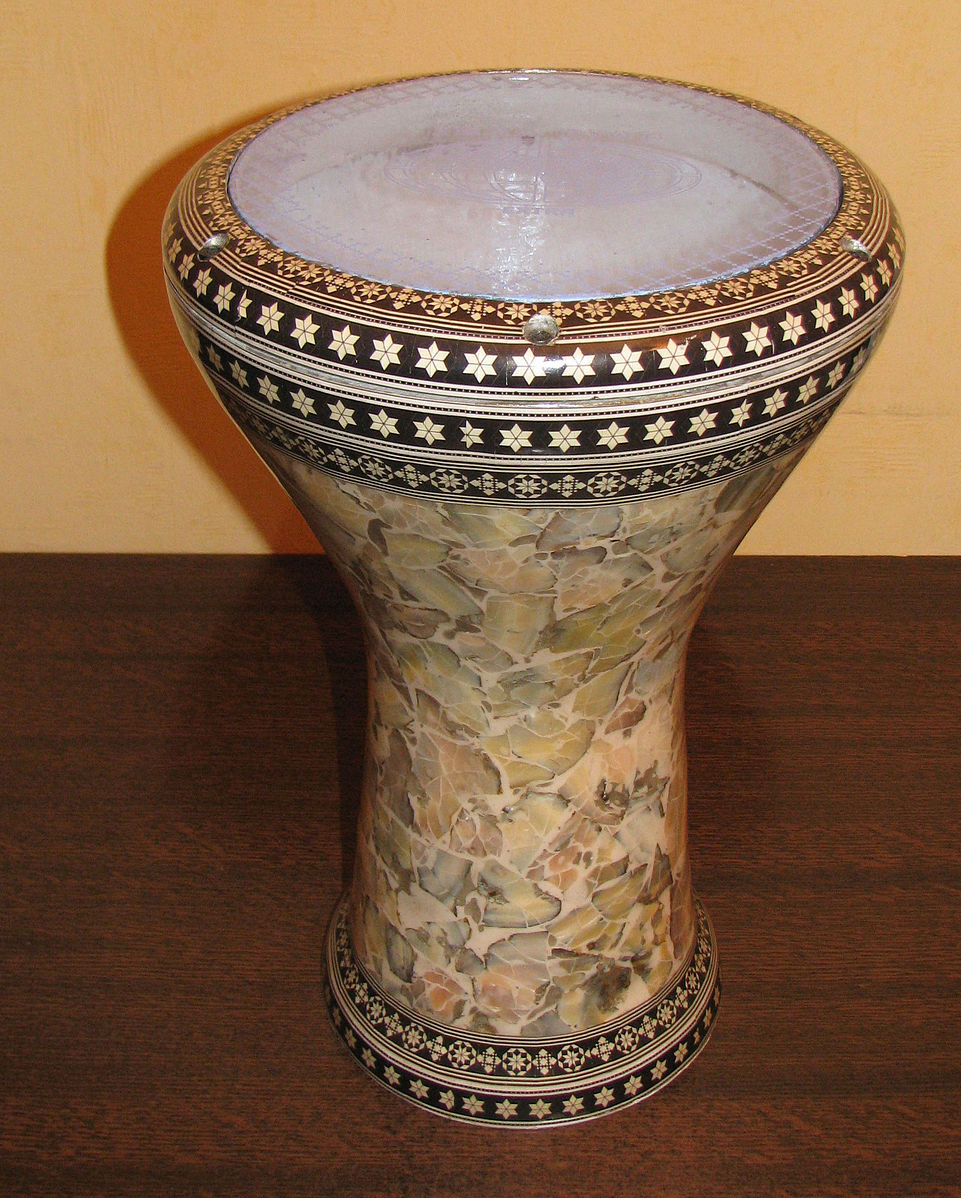 Arabian in origin, the Darbukka is commonly found in Turkey, the Balkan countries, and North Africa.The Darbukka is a drum with a goblet or chalice-like shape. Also known as the Dombak, Doumbek, Darabuka, and Darbukka it is commonly associated with Middle Eastern music, often as the lead voice of percussion.

The riq  (also spelled riqq or rik) is a type of tambourine used as a traditional instrument in Arabic music. It is an important instrument in both folk and classical music throughout the Arabic-speaking world. It traditionally has a wooden frame (although in the modern era it mayalso be made of metal), jingles, and a thin, translucent head made of fish or goatskin (or, more recently, a synthetic material). 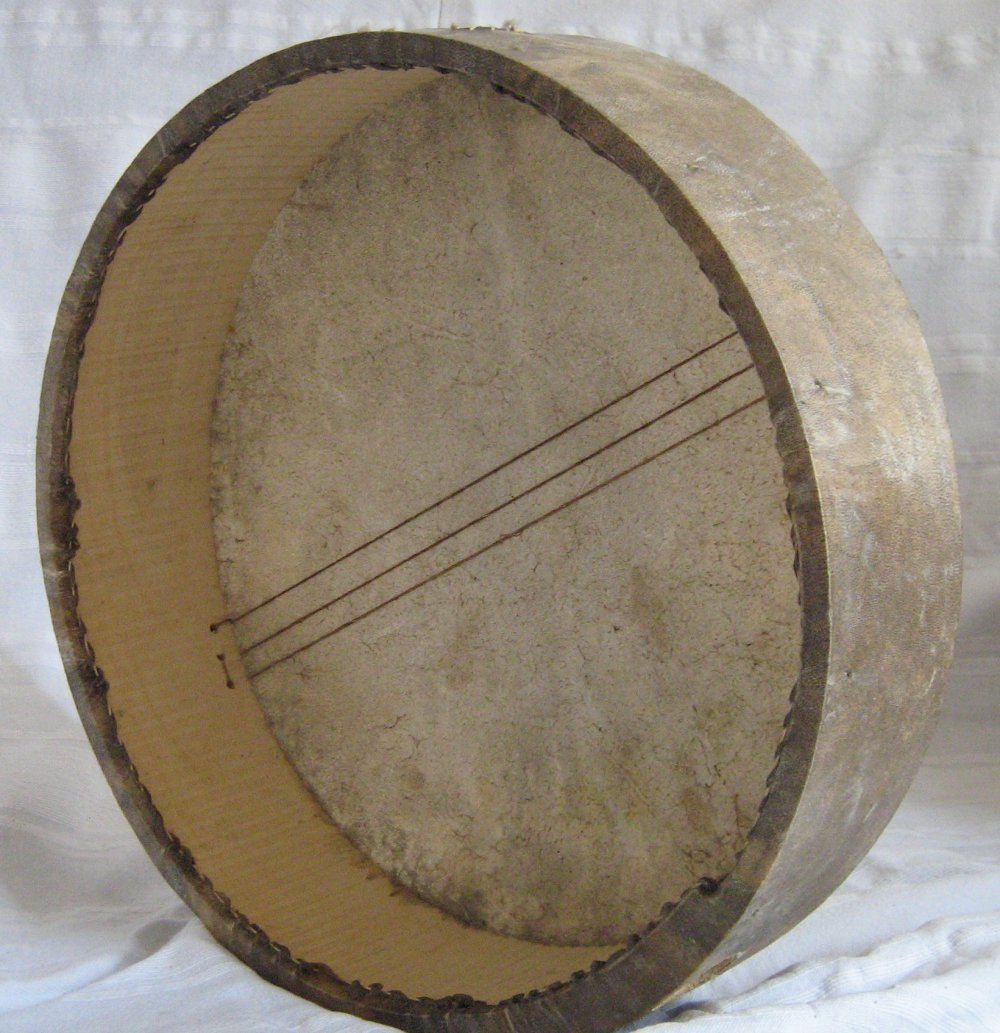 Thank you for subscribing!